Jamie Howell, a multi-talented athlete from Queensland, has her eyes set on making the Top 8 in Athletics at the next Deaflympics. COVID-19 impacts this year has been derailing a lot of national and international events including the World Deaf Athletics in Poland and the Australian Athletics Championships. As a result, Jamie had to miss out on these opportunities. However, Brazil is bringing hope to many by winning the bid to host the next Deaflympics next year and Jamie hope to take up on these opportunities.

The 22-year-old has been in athletics for 13 years and is also involved in a number of other sports. These include AFL, CrossFit, Rugby 7s, Netball and Touch Football. She is also working as an Auslan Language Model (ALM) and is studying her Bachelor of Exercise and Nutrition Sciences.

“I was always an active kid, involved in sport, and had natural talent. I would often win races, make sporting teams and win school age-champion for Athletics and Cross country,” said Jamie. Her parents have been her number-one supporters in her life, especially her Dad when it comes to athletics. “Dad and I work very closely together with Athletics. He comes down to the track once a week to work with me on my Long Jump and always comes to all my competitions. Every year, we travel to Nationals together. I wouldn’t be where I am today without him.”

Born with a profound hearing loss, Howell was fitted with a cochlear implant when she was 19 months old. Jamie never let her hearing loss hold her back from her sporting ambitions. Her parents signed her up at Little Athletics when she was just 9 years old. When she was ten, she started competing at a high level in sport as a para-athlete (called an Athlete with a Disability (AWD) at the time). She eventually made it to the Nationals for Cross Country and went onto the Pacific School Games for Swimming and Athletics where she won 4 Gold Medals and broke her first Australian Deaf Record for Long Jump.

“The [Pacific School Games] led me on the journey to where I am now.” In 2017, Jamie competed at Deaflympics in Turkey where she finished in the 9th place for the Long Jump event. “I am still training hard for the Deaflympics next year. I’m more focused on just Long Jump and sprints. Ultimately, [some of] my goals are to make the Top 8 at the Deaflympics and hopefully tick off a World Deaf Athletics Championships.” 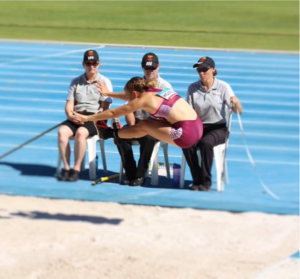 Jamie Howell recently became better known across the deaf community in Australia when her AFL team mate shared a video that went viral on social media. Her team was seen signing their club song in Auslan which left Jamie speechless and proud of her team’s intentions of including her in the post-match celebration.

She found her deafness to be a challenge at times. “When I compete as a para-athlete, I must remove my Cochlear Implant which means I can’t hear the starting gun. [We now] have lights at most State and National championships but occasionally, there’s a technical problem and the lights aren’t working. In this situation I have to get a tap start which results in a significant disadvantage, especially in the 100m and 200m where it comes down to milliseconds. Luckily, this doesn’t impact Long Jump [event].”

Athletics Australia has plans to share a demonstration video in the future on how to install a starting light system in track events. 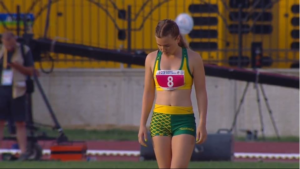